Ok, let me just say this out front. I’m not going to give you any kind of sabermetric breakdowns, or real statistical views on why Justin Verlander should or shouldn’t be the AL MVP.

I posed this question about Verlander winning the AL MVP to my friend Matt Riggleman last night. I had seen it was a topic of debate yesterday on ESPN, and I wanted to get his take on it. Both Riggleman and I follow MLB on a daily basis mostly because we are fierce fantasy 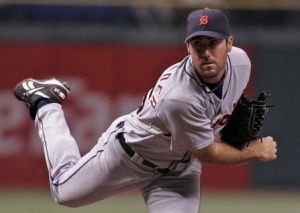 baseball competitors, but also because we like baseball. Riggleman didn’t even give the question the light of day. He said Verlander shouldn’t win the MVP even before I finished the question. Granted his view point on this is similar to most who follow baseball, simply because Verlander is a pitcher, and starting pitchers at most start 33-35 games during the regular season.

When teams play 162 in a season, and an ace starter isn’t playing in 127 of those games, how can he be the most valuable player on the team? Let alone the entire league?

I have beef with that sentiment because as soon as the post season rolls around. All anyone can talk about when it comes to winning a World Series is the starting rotation. How pitching and defense wins championships.

That is why I disagree with Verlander not getting serious consideration for the AL MVP. In my eyes, the fans, writers, and voters can’t have it both ways. Starting pitching is either really valuable, or it’s not.

I’m of the mind set that if whenever somebody is slated to play, and they go out and dominate the competition 95-100% of the time, that is pretty freakin awesome. Basically, that is what Justin Verlander is doing this year. If I had a MVP vote, I would be voting for Verlander. No disrespect to Curtis Granderson, Jacoby Ellsbury, and Jose Bautista who are also having awesome years. But the Yankees, Red Sox, and Blue Jays would be in exactly the same place in the standings with or without those guys in the line up everyday. Verlander is going to will the Detroit Tigers to the playoffs, maybe even into the World Series!