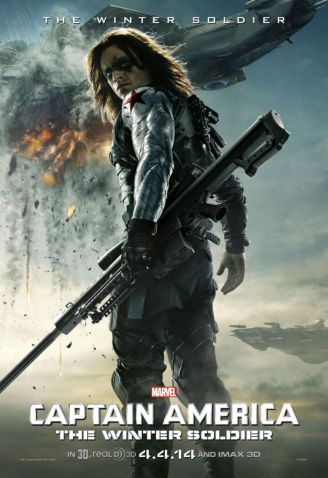 The countdown to opening night is under a month and the answer is yes – I’ve been greatly anticipating the arrival of The Winter Soldier on the big screen, and I will be at the theater April 4th when he shows up. The perfect way to kick off my birthday weekend. (Seems like April 6 will be here and gone before I know it)

What I believe to be the best of the promotional character posters (The Winter Soldier himself!!) was recently released. And I must say, Marvel saved the best for last. Bucky looks great here and in all the trailers I’ve seen for this movie. This poster is so awesome, I’ve decided not only to post about it, but I need to own this poster ASAP.

Also, not to be overlooked because it’s crazy cool as well, is Steve Rogers wearing his Super Soldier gear. I know Marvel has been getting criticism (which stinks) for parting from Captain’s classic stars and bars for this outing, because the Super Soldier look is badass! Kudos again, Marvel.