“Jameis, what’s that over there? Hanging off your Heisman…”

“Oh man… ya got some of those crab legs and ya didn’t tell me?”

Who does this? Jameis does. 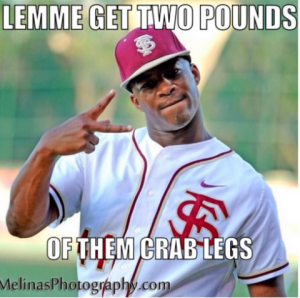 I guess all those GM’s in the NFL that were willing to take Jameis as high as #1 overall in the upcoming draft if he were eligible, will have to rethink what to make of Mr. Winston.

I’m not sure why a little walk-about with some C-legs has anything to do with throwing a football into a window 20-yards down field off his back foot? But it’ll be broken down now by analysts everywhere from now until next year’s draft, when Winston is almost a lock to declare for the NFL.

Sure, character is a major factor for NFL GM’s on whether or not they can depend on a guy. I get that. But this crab leg ordeal is something that should never be talked about again, after the luster fades the next couple of days, while breaking down this dudes football ability. The rape allegations, suspicions, or whatever that were dropped against Winston are 1000 times more important/prevalent when talking about draft this guy to your team. Crab legs… no.

One reply to “Classic Move By Jameis Winston”