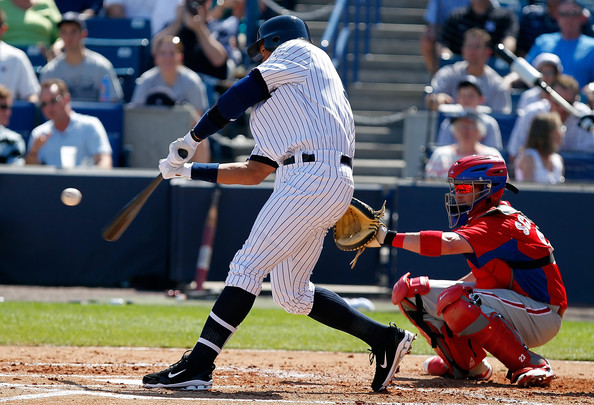 Those of you who are looking for the answer, I don’t have it. I’m asking the question myself!

Alex Rodriguez just singled in his first spring training AB vs Philadelphia starter Kevin Slowey. A-Rod was quickly down 0-2 after swinging and missing at 2 different 91 mph fastballs. For him to be late getting the bat head around in his first live action since September 2013 is to be expected. But what is to be expected of Rodriguez 2015 fantasy baseball season?

The Yankees clearly don’t have any expectations for him – after signing 3B Chase Headley to a 4-year contract to man the hot corner.

Filling third base on any fantasy roster has almost become a decision between the lesser of two evils. I know I struggled with 3B all season during the 2014 campaign. Could Alex Rodriguez be the answer fantasy managers question at third?

I’m gonna go out on the limb and say he should be in the mix. He’s not a top 5 overall fantasy option anymore. He’s not even a top 5 option at his position anymore. But with the super limited production at 3B in recent years means he should be on everyone’s radar. Every morsel of power production should be explored and Rodriguez could be that super cheap power bat just waiting to be added to rosters.

I won’t be leaning on A-Rod as a pillar of my fantasy roster, but I’d be completely ignorant and/or flat-out stupid not monitor Rodriguez throughout the spring and into the opening month of the season.